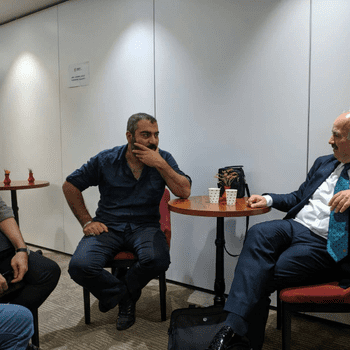 Do you have questions for Paro?

Log in to ask Paro questions publicly or anonymously.

With the pandemic, the World has started feeling the “New World Economy”. While the businesses with online facilites are growing very fast, the compaines with the old century business model are simply dying or shifting to “New World Economy”. The World is becoming decentralized. Ordinary people in the streets are talking what maybe the near future and what may be the effect the information age on life styles. Everybody feels that in the very near future the crypto currencies and decentralized technologies will be part of our life. People will be using the blockchain tehnologoies not as only currency but also for solving many problems with smart contracts. The banks will be either disappearing in this new economy or will shift to much smaller decentralized financial bodies working more closely with communities in a decentralized manner.

Decentralization is the key word in this “New World Economy”. People need a different mind set regarding decentralization. But they also need to be using tools of decentralization that will help them adapt to new world economy. Therefore, a decentralized financial literacy is needed for all people, young or old.

There must be training programs to ease the use of the decentralization tools for anyone in the economy. There are so many issues that are currently known mostly by technical geeks. How people can be participating in the money creation easily? How can an ordinary person open a crypto wallet safely? How can a child buy bread for the family? How can a self sustaining house producing own energy be benefiting with the decentralized tools? There will be so many different crypto currencies. How can people change to another currency safely by using decentralized Technologies? There are so many questions. There is no such TV or mass media program that we see. At least, in Turkey, as being one of the highest with the investors in crypto currencies.

People at streets are talking and understanding that a New Era and a New World Economy is coming. They simply feel it. With the crypto currencies in the central place, money can be created by people now. Not by banks only. How can an ordinary person benefit from this?

Istanbul TV Media group owns TV and Radio companies Kanal34, Magazin34, News34, BrukselTurk and TV Mor as Kanal34 TV being the greatest TV group. The company has very large group companies. Group owns some Radio stations, too. Through a large network, they can distribute programs to very large audience. The group has studios and branches in several Eurpoepan countries such as Germany, Belgium and the UK.

Kanal34 TV as being largest company in the group has very advanced technologies such as many touch sensible large screens each of which can connect to internet during brodacasting. We have tested with the equipment how to demonstrate by connecting to internet and use some decentralized tools. For example, we can easily conduct a credit loop, atomic swaps on two screens. We can open a new online wallet and send it to Brussel in a related session.

We will be able to show the tools and ways in an advanced studio to the World. Some parts may be in English by having live connection to Open Source Communities.

How Kanal34 makes the broadcasting to Turkey and Europe

Newly established Komodo Office in Turkey will be sponsoring the new TV program “New World Economy”. We strongly believe that Komodo Platform with very large open source community all over the world will support us in this mass traning program. Komodo has all the necessary end-to-end tools to achieve a decentralized world of a New World Economy. We plan to use and demonstrate the power of decentralization tools whereever necessary. But of course, this mass training TV program for a decentralized financial literacy will also include the other programs/environment towards “New World Economy”.

There is already an analog blockchain in Turkey used for decades with nearly half of Turkish GDP running with post-dated cheques. With a market size of greater than 250 billion USD, post-dated cheques alone run an economy equivalent to the current total global crypto market.

You can find an ordinary shopkeeper understanding what and how a post-dated cheque works. It is very rare case that a business person does not use post-dated cheques regularly in Turkey. Even a business person does not use, he/she must be definitely knowing at least how it works. If someone avoids using it, it is because of a big problem that we know as defaulting, i.e. NON-REDEMPTION.

As a regular post-dated cheque user as any business person , the owner of Istanbul Media Group was very interested how Marmara Credit Loops (MCL), i.e. one of the Komodo projects solves the nonredemption problem.

We had a demonstration to the group owner Mr. Adil Koçalan how credit loop system works to solve this ancient problem in bouncing post-dated cheques and promissory notes. We agreed that the new world economy might be understood by very large audience in mass scale if we give examples in weekly programs.

The first program will be on 25th June, Thursday at 20:00 at GMT+3. We will start with problems in “Old World Economy” where money is created by banks. We will analyze the old fashion money creation and their problems in regards to unsustainability.

We will announce the details later. Please share your ideas and comments for every program towards a “New World Economy”.

Liked by Acura and 7 others

Liked by Cipi and 5 others

Article "Why Komodo?" by drcetiner was published on the Turkey's largest coin news site. (turkish news).

Liked by B. Gültekin Çetiner and 8 others

Today We talked to a large audience today about Third Wave Civilization,

Role of Blockchain Technologies. Komodo Way of Smart Contracts specifically how they ara used in Marmara Chain project to solve nonredemption problem in post-dated cheques.. (It is in Turkish)

Liked by Audo Kowitz and 4 others

Komodo has a very nice and innovative technology developed to secure any blockchain against 51% attacks. It is called delayed Proof of Work, shortly dPoW.

Why Candidacy for Notary Node?

Liked by John R and 2 others

Liked by John R and 12 others

The Komodo Platform was my first step for blockchain technology development. I have learned a lot in this area and have found many opportunities to improve myself. For the Marmara Credit Loops project, we developed the first "Post-dated check" system based on blockchain technology in the world.

Marmara Credit Loops is a system established to solve the challenge of non-redemption, the greatest problem for post-dated cheques in the world economy. It is the first in the world as an open source project and we have more development ideas related to it.

The blockchain industry continues to grow further, thanks to the Komodo Platform. I am honored and proud to be a part of this project.

Liked by Audo Kowitz and 7 others

We have successfully completed our Istanbul University - Cerrahpasa workshop activity.

Thanks to all the friends who participated.

Liked by Satinder Grewal and 21 others

Liked by John R and 13 others